Most of you all know that Mr G La Roche had a dream around 10 years ago to put on a music festival to raise a bit of money for the local community.

Well it is 10 years later and it seems that the universe !!! well ok North Hertfordshire was ready for it and opened up their ears and wallets to embrace the idea.

On the 10th Anniversary of Balstock this year Mr G the G-meister, Gesus, G-Spot and erm Graeme is putting on the party of all parties for you all to enjoy a multitude of genre’s.

You have Metal, Folk, Choirs, Dance music (erm),  Comedy, Rock’n’Roll ,Blues, Punk and even Karaoke !!! So lots of things to dance, bounce and headbang to.

Anyway I digress G has three appearances this year at Balstock.

As Mr G La Roche his solo performances have gone down in local pubs, clubs and festivals all over Herts, Beds and Bucks area as wait for it………….legendary he is playing The White Hart at 22.20 – 23.30 on Friday 11th Sept it is a must for all Queen lovers and his original material is fandabidozy !!!!

As Billy Skins 5th is a mysterious masked figure with cannibalistic intent (assuming he’s human). He can be found in various jungles, tropical and urban, but the only records we have of him are drawn in cartoon form.Billy Skins 5th are an emsemble of 3 youths who use instruments to tell folk stories of Billy Skins and his antics. They often use the medium of ska, gabba and punk to tell these far fetched storys. But don’t be fooled by the lyrical content, these songs have morals that must be heeded!!! They are playing The Engine on Friday 11th at 20.05 till 20.50

As No Sleep Til Bedtime are a covers band from Baldock, North Herts who take on all sorts of songs from Queen to the Prodigy. Graeme La Roche (G) – Bass/Vocals Robert La Roche (Eddie) – Guitar/Vocals Kevin Smith – Drums They will rock your pants and socks off ready for Bedtime with their energetic and raucous performances which will leave virgins weeping in the corner. They play The Boot on Saturday 16.00 till 16.40. 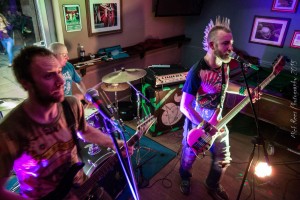